Ok, I admit it - I like to stretch people to think out of the box! So, last week when I had my "Girls Night Out" class and we made "girlie" cards --- I put a whole bunch of card elements into a bag and said - Ok, make something with it! 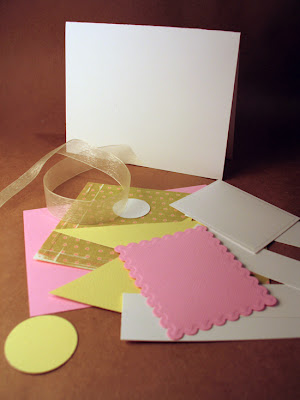 I had a scalloped rectangle, a regular rectangle that could fit inside, a 1-1/4" circle, a 1"circle, a 5-1/4 by 4" pink piece, a 5 by 3-3/4" polka dot piece, 4 - 1" strips of white, two triangular shapes and a white card base. Some of it was kind of predictable --- the strips of paper and the triangles were not! I also threw in some polka dot and yellow sheer ribbon just for kicks. They could add ANYTHING they wanted but they had to use everything. Well, some grumbled and I saw some "NO WAY!" looks on a few faces so I conceded that they didn't have to use the strips if they didn't to. Funny ladies!! :-) All of the cards were really, really neat. Each one was different and very original. After they were done, I gave them a blank piece of paper and told them to vote for their fave---and they couldn't vote for their own!

Here was my card. I admit, it isn't fair because I kind of sketched it out before I made it knowing that I wanted to throw in a few curves..... 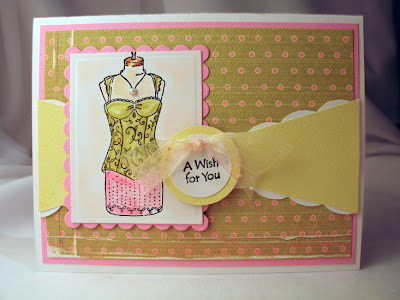 Once all was said and done... they voted... and ANNE was the winner!! Here was her card! 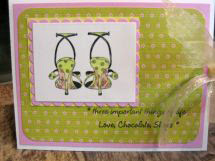 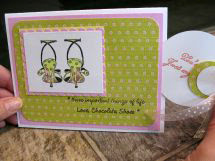 She ended up using the triangles as a very tight mat under her scalloped rectangle. I love how she used the mat as a kind of pocket for the circle tags! Isn't that a fun idea??? Sorry about the size of these photos. I forgot my camera that night and my friend emailed me these shots. I think when they were emailed - they lost a bit of resolution because they were sent as a slide show. No biggie though - you get the gist!!

Well, I am working on tomorrow's tutorial and hoping it all turns out!!!
See ya then!
Posted by Julie Koerber at 3:05 PM

What a great idea Julie - I love the cards!

You girls must of had fun,wish I was there!!! Great cards!!!

I love Anne's card, she did a great job. What fun, I have been in a class like that and it really taxes your brain. MOM

Hey Julie... Hope you had a great weekend... We sure did.
Love what you did with this card and the idea of putting it all in a bag... Fabulous idea.

What a fantastic idea for a stamp camp! Wow...very cool...I bet that was fun seeing what everyone came up with. Love your card!

Beautiful cards, love those colours together!

Julie, it was a fun class, and I love having a challenge like that!
It encourages people to believe in their own creative powers.

There's been many a class or demo where I've just been blown away by the creative output of the teacher -- usually YOU. And it's nice to have a reminder that we all have creativity if we just let lose once in a while.

Deborah B, said "Julie, great idea, and by the way what is the name of the stamps that you used? I tried to go the website you design for and could not locate the heels (winner used) and the corset...can you please help me out in locating them to buy?

Deborah- here's the link!
The first one is called Flattering Fit
http://impression-obsession.com/Merchant2/merchant.mvc?Screen=PROD∏_Code=6934&Category_Code=NEW
The second one (shoes) is called Fancy Ankle Straps
http://impression-obsession.com/Merchant2/merchant.mvc?Screen=PROD∏_Code=6939&Category_Code=NEW

Here's another one that is really cute too!
http://impression-obsession.com/Merchant2/merchant.mvc?Screen=PROD∏_Code=D6707&Category_Code=AB

They were all under the Category "New"
Hope this helps!
Julie

Deboarah, Disregard that last email link list - It didn't work! But, if you search under the names I gave you- you should find them!

What a fun idea and what cute cards! ...great idea that I might just have to snake for my little stamp group! TFS and have a great night! :)