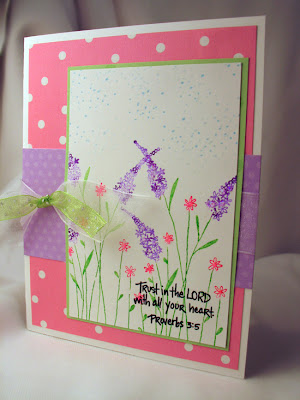 Fridays mean Sharon Johnson's Stamp Simply challenge and other than saying TGIF, I love checking out her site to see what kind of creativity she has cooked up. I love her challenges because she doesn't say... "Make a card just like this..." She says, when you make a card, use this element. A few weeks ago, she said simply "use pretties." That could be anything! You should see all the creative things people come up with! So, this card today is my delayed reaction response to her challenge. Life has just been like that lately!

For this card I used a flower stamp from Penny Black that I just inked up with markers and stamped it along the bottom of my white card stock piece. I used a dot type peg stamp from Stamps By Judith for my "sky." This was kind of fun. I inked up the dots and then just kept tapping until the ink was so faint you could barely see it. Inked up the stamp and did it all over again until my sky was colored shades of blue. It's a faint way to add a bit of color. The sentiment is from a clear Stampendous set that features all different Bible verses. This is only the second time I have used this set and the first time I used this sentiment - but for this card, It was really needed. You see, I plan to send this one to a friend who just found out her mother has stage 4 pancreatic cancer. Man, that's tough. Words are hard to come by in that kind of situation, but the Lord never fails. So, that's why I thought this verse could bring some comfort. 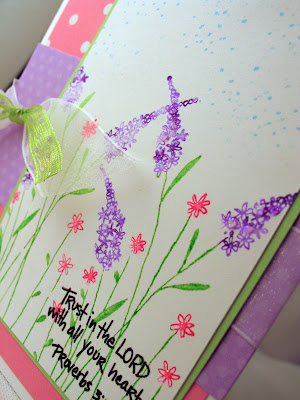 On a much brighter note, I hope you are all happy, well and enjoying your week!

p.s. My friend Jacki at the Card Castle is having a leap year challenge that will end, well, at the end of this month! Find the oldest stamp you have and let her know just how long you have been holding on to a never before used stamp. AND, make a creation with it! I've been told by Jacki that this contest is two fold and the bigger prize will go to the people who enter creations. So, head on over to her castle and check out the details! I am entering this card since I used a stamp I had been holding on to for a LONG time. But, I told her I would dig out one that I have had since the beginning of time and try to come up with something else!! This should be fun. I hope it's not awful! You know how trends in stamping images change!!
Posted by Julie Koerber at 7:51 AM

Beautiful card, Julie! It really should brighten her day some.

Sorry to hear Julie! Those are tough times for sure when we hear the C word!!! But I'm sure your card will bring some comfort to her!

Jules, Michelle will love your thoughtful card. I sent her one and also one to her mother,Theresa.
It's a tough task to send these kinds of cards but Iknow they appreciate it. MOM

It's extremely pretty and I'm sure it will be appreciated very much by your friend. Always difficult to set the right tone but the verse is perfect.

Julie, this card is beautiful! I love it and I know it will mean so much to your friend. I am so sorry to hear about her mother. That really is such hard news. We will keep them in our prayers. She's so lucky to have a friend like you. Take care! :)

What a wonderful friend you are to share this beautiful card! I love the verse...and your card is lovely! She will appreciate it so, so much!

What a beautiful card -- but I am so sad to read the reason you need it -- so sorry -- and I'm sure your friend will love it!!! The colors, the dots, the delicate flowers and ribbon -- such a perfect card!!! All topped off by beautiful scripture -- can't get any better!!! So glad you played -- thanks much!!!

This card is so pretty, such nice bright cheerful colors, I hope it brightens your friends day just a little...

So sorry to hear of this tragedy, but the card should help. Reaching out, especially with something from the heart, always helps bear the pain. This card is lovely.