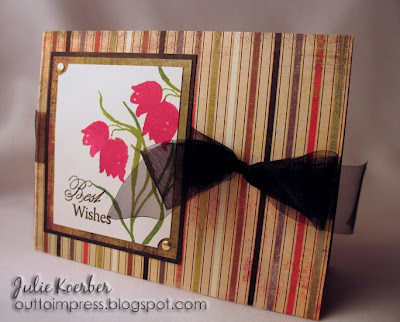 Hi all! Happy Wednesday! Got another super duper easy card for you today! Remember how I said that yesterday's card could be a part of a set? Well, this could be card #2 in my little collection of cards! I used more of the Scarlet's Letter collection from Basic Grey, and of course, the Spring Ephemerals set from Flourishes. I also used the same sentiments set - using the 'Best Wishes' from the Many Sentiments set. Why not? It was all there for me on my desk! I even used the ink pad thumping technique (Olive and Vintage Vivid! for leaves and Garnet for flowers) - remember - that's when you "thump" the different colors of ink directly on your stamp to color it instead of using a marker. I used my ticket corner punch on two opposing corners and added some hot fix nail heads (Kandi Kane corp.). Tie on some black sheer ribbon, mat it up and you're done! Ok, this is card #2. Will there be a card #3. It hasn't been born yet, but that doesn't mean it won't be! :-)

Before I go, a bit of a family folly for you! My daughter decided at age four that she was JUST TOO OLD for baths. She informed us all that showers were going to be her new bed time routine. As we got the water warmed up tonight, I heard tons of giggles as she waited to "jump in." My hubby helps with bath time and I must have missed the conversation about why it was so critical that she get rid of baths now. Well, hubby says laughing, "Ellie's going to be five soon and she said that she had to take showers now because she is still four and her brother started showers when he was five." What do you think she did as soon as she got out and got dressed. YEP, she ran down stairs and told her brother!! That's my girl! A competitive little spirit! Gotta love it!!

Hope you're all enjoying your week! It's hard to believe it's Wednesday already!!!

tell Ellie your never too old for baths!! especially the bubble bath ones, well at my age its the epsom salts baths, hehehe
I thought I might jump over and find some sky, hehehe! seriously, you want to case me????? I was so honored to read that, truly honored!
Love this card, you have such an elegance about you!

What a beauty! Love the paper, with the flowers it is so pretty. Very lovely. Mom

This is a nice one Julie!!! All is well here.. Just getting ready for work...Tomorrow hosting Teacher's night here so have the rest of the gardening to do, clean the house, make some appetizers and chill the wine...
Have a good one!!

Cute story! Our little guy turns 5 today. A couple of weeks ago he decided that he wanted a shower instead, too. That lasted about 2 times because he doesn't like the water on his face! Now he's decided to do his "own" bath, which, of course, doesn't take us any less time! These times are precious!

Wait till Ellie is older...she will relish soaking in a hot bath to soothe those aching muscles!!! LOL (I am revealing my age with that comment, I know!)

Beautiful card, and I do see the set theme...can't wait to see #3. Have a great day, Julie!

Love the card! And I'm lovin' this BG paper.

Your daughter's a firecracker!

what a sweet story! She's so proud of being a big girl, hehe! So cute! tfs! This card is gorgeous and stunning in every way, Julie! I love the striped dp and lovely shade of pink on those flowers! Great work, as always--hugs!

Such a pretty card, the background paper is perfect for the flowers :)

What till Ellie gets a little older and she'll love the bath tub again especially with candles, bubbles....awww total relaxation! But she's too young to relax yet! Kids are so funny and you want to capture all the cute little things they do. Your card is beautiful, as usual!!

Put a brick on that girl! Very lovely card, especially considering the minimal time and effort needed to make it so gorgeous. Was wondering if you could stamp something I don't like?!!

Beautiful as always!!! You give me such inspiration:)
Laura