Hi everyone and happy Saturday! Gosh, this week has been a creative frenzy and today -- I have more fun coming your way with a blog hop designed not only to inspire, but to give you a chance to win some fabulous goodies as well! It's a......

These two great companies teamed up to show you what you can do when you pair Scor-Pal with American Crafts! If I am your first stop -- you will want to head on over to the American Crafts Blog HERE to start the hop! Like I said, there are giveaways along the way, so you don't want to miss out!

On to my creation! I whipped up this little treat box and coordinating mini card. My card is only 4" by 4", so you get an idea of the size of each one! 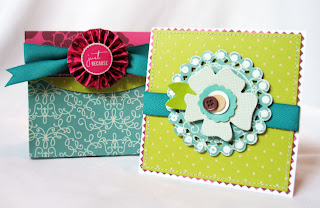 I used the Garden Cafe collection and I have to say, I love these bright and cheery papers -- they just make me want to smile! From there, using my Scor-Pal, I scored 2" around the two shortest sides and 2" along one -- only one of the longest sides. I also scored on the 1"  and 7-1/2" lines, stopping at the lower score line. I inserted some graphical guides for you to "see!" 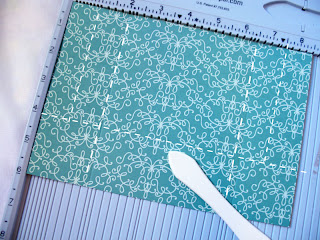 I folded the bottom up and then, ad you can see, I cut along the score lines. 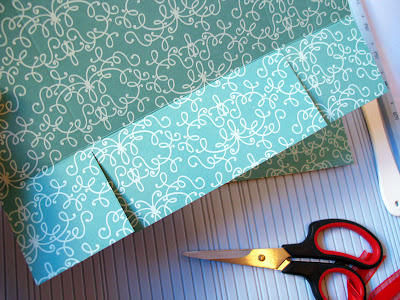 On the second piece, I scored just like the first but instead of cutting flaps, I cut out those two outer sections completely. 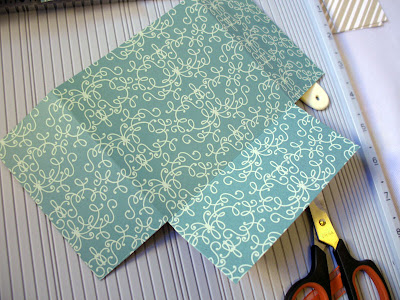 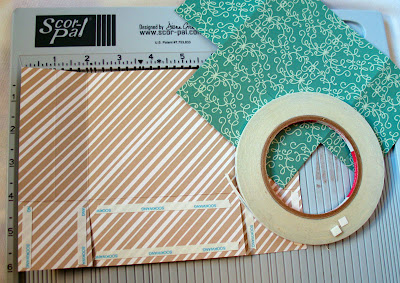 I folded the flaps in and then, inserted the second piece of card stock like so... 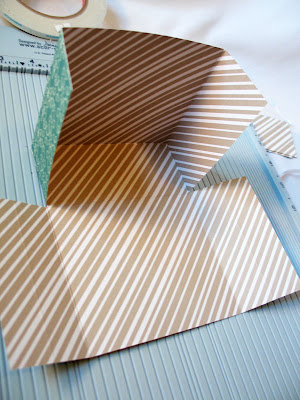 I folded a mountain fold along the sides like so.... 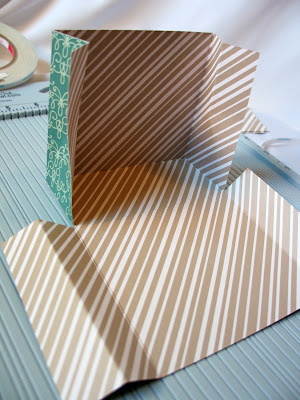 And then, I cut off 1" of my sides along the mountain fold. 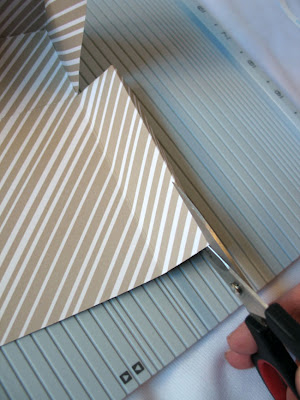 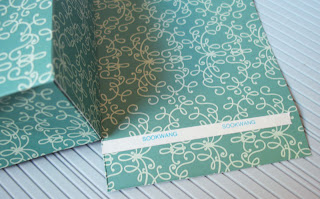 And secure the two pieces together to create the base of your treat box! 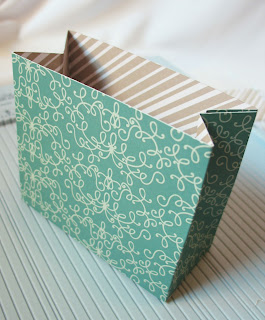 Next, you'll want to make the flap for your creation. I started with a 4-1/2" by 6" piece of paper and scored along the 3" line, folding with a mountain fold. I also used a die cut edge to create my curvy flap. You can use punches or whatever you have, just to give the front of your treat box a little extra pizazz! 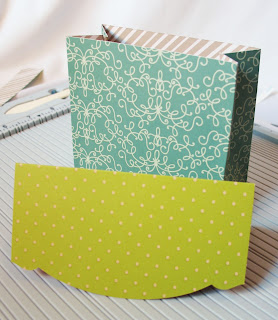 The next step is one that really isn't all that necessary. I wanted my flap to be two tone, so I cut the edge off my flap and then  flipped the paper, using the opposite side of the Clover Cantina Varnish paper at the top. I sewed the two pieces together and then added some teal ribbon as a kind of cummerbund closure. Then, I accented with a "Delights" accent in Biscotti.  Just that simple! Now I can get some candies or goodies to stick inside to give as a little thank you gift to someone special!

I wanted to create a kind of gift set, so I created this coordinating 4" by 4" card using the same papers that I used for my treat box. After layering, adding some stitching and pinking the edges, I added a band of the same teal twill ribbon, used one of my Spellbinders Beaded Circle Dies as the front mat for my card and then accented with another one of American Crafts chipboard stickers - it's called "Details Trifle."

And here's another look at the finished project! 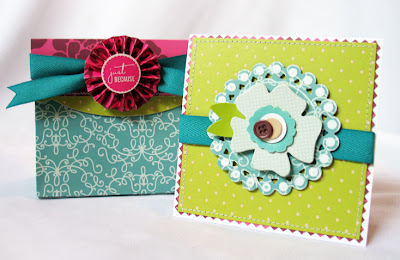 Thanks for stopping by! I hope you have a great rest of your weekend. Now be sure to hit the next spot on the hop and visit....


Jamie Harper
Posted by Julie Koerber at 7:00 AM

Email ThisBlogThis!Share to TwitterShare to FacebookShare to Pinterest
Labels: Scor-Pal

Love your container...great for tucking away so many goodies! :)

great project thanks for the detailed instructions.

great project! Thanks for sharing the tutorial!

In love with the paper you used for the tut! Thank you :D

Yet another outstanding job! Thanks for all of your hard work! <3

Simply adorable, love both of your little projects. Thanks for sharing your designs with us.

I love to leave little treats for people. Thanks for sharing.

Lov this little pouch totally cute. The colors are vibrant and fun.

So cute, love your projects!

Beautiful projects...thanks for the tutorial.

Wow love this idea. The colors are amazing too. Thanks! Tine

wow this is just so fabulous...i totally love this...thanks for sharing..

How cute! You make it look so easy! I really appreciate all the pictures to show things step by step. Thanks.

Super cute card and gift box, Julie!! Hope you have a wonderful weekend! ^_^

That is a fabulous project!!

Beautiful work, that's why I subscribe to your site!

Oh how I love your box!
Thanks for the idea!
Christina

Thanks for showing how you made this. It's awesome!

Those colours are to die for! I love the treat box, absolutely gorgeous, and who wouldn't want to get treats in that?

This is such a super cute gift set! Thanks for the instructions!

Great projects! Thanks for the chance to win!

This is really cool! What a great way to give out treats!

Beautiful projects! Thanks for the chance @ giveaway!!

what a fab project and what a great project to use with the scor-pal. lovin this blog hop!:)

Just love the little pouch! I have to try it out! The paper is gorgeous too!

you can make a lot of projects with the scor pall !!
love your cards

Great packaging tutorial. Thanks for sharing

Such cute boxes and mini cards. I am thankful for you tutorial. Thanks so much I learned something.

How CUTE!! Thanks for explaining how you made the box!

Great box. Thanks for sharing how to make them. They would make great gifts.

Great treat box!!! Cute card too, love them together.

i'm going to try the treat box for my sons birthday. thanks

what a great little treat box! thanks for providing the instructions! laura j

What a great project thanks so much for sharing

Such a lovely project!

Great project and great instructions. I will try this!

Love that pouch...very cute idea! love your color combos on your projects too! Really cute!

This is great! I'm pinning!

Such a cute gift set :) thanks for sharing your awesome project!!

Aahh.. I can see them filled up with yummie chocolate easter eggs ;o)
Thank you for sharing how to make the box.

This is a lovely project! I really like the "Scor-Pal", you can make so many things with it.... I only don't have one :D.

Fabulous project, thanks for sharing!

Great job! LOVE the idea! Can't wait to make mine.

Hi Julie same name as my daughter,I love this card,so cute and the circle design makes it.
Smiles
Ita from Ireland

Great projects - thanks for the directions and for sharing!!

I love your treat bag and card!

This little treat box is so cute. I am definitely going to be making these to put treats in for my friends.

great project...thanks for the directions

thank you for the tutorial (curious how you finished the flap though). Beautiful papers. appreciate your sharing!

gorgeous project! so love the colors and design. thanks for the tut

Love the cards in this project....

Love that little paper container! May be perfect for May Day!

Thanks for the step-by-steps! Makes it so much easier to re-create! I love it!

Very pretty set! Love the colors of these papers and embellishments. Love the little pouch, too.

Thanks for the tutorial...love the treat box!

wow... this is beautiful!!!!! a fun way to use scor pal! thanks for sharing

Awesome design...inspiring! Thank you for the great ideas!

Cute little treat box. Love the papers on this one. Would love the chance to win!!

What a cute pouch, I love this idea, gotta make some soon! TFS. I am a new follower and will try to come back soon!!!
Have a great day
Liz
unikebyyes {at} yahoo { com}

Your box turned out wonderfully!

I love AC thick paper for altered projects like these. I like your treat box - will have to try it out!

Love your blog. Awesome cards and you created. Time to hop along.Thanks!

That is so stinkin' cute! I love this idea! Thanks for sharing!

Thanks for the how-to on this great project!!

very nice! I'll have to try out that treat box!

Love the treat box!! I will be trying that one soon.

Love your treat bags, these are so cute

Your set is adorable! Love the colors used and thanks for the tutorial, it looks quite simple.

Great project! Thanks for the inspiration!

Very cute...love the colors of your papers!

Such cute projects...really lovely! Beautiful and fresh colours too!

That is a cute little gift box, and card!!! I will have to lift this for Christmas treats this year because I love to bake and give a little something extra with each present!!!

Thanks for the tutorial - it looks easy to make=)

Wonderful project, thanks for sharing!!