Wow... it's been a hot minute since I have posted but thankfully, Marcella over at Power Poppy gave me a reason to dust off my Copic markers and take a little time just coloring with glee. It had been so long I felt I almost forgot how to do it. But, as my breathing slowed and I studied her gorgeous illustration, I realized just how badly I missed this sensation - slowing down and getting lost in the craft.
Today Marcella is releasing four new digital images that are oh so beautiful and have a sweet meaning behind each drawing. So, it's time to take a peek at.... 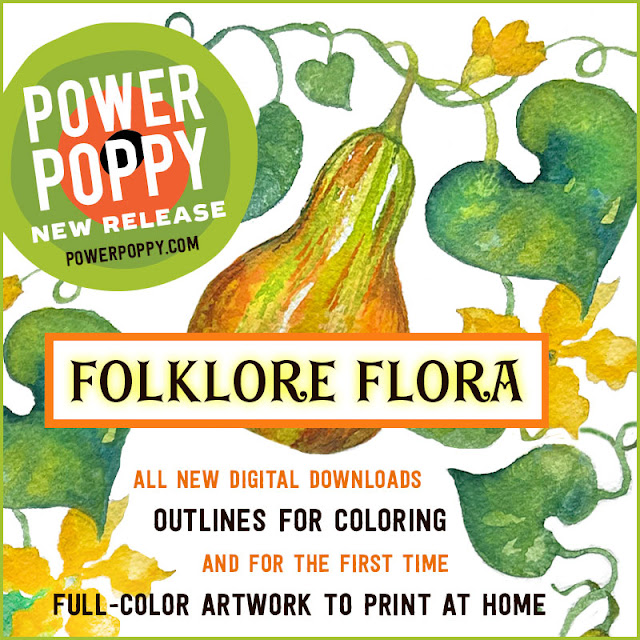 Folklore Flora is a four-piece set that not only comes in black line but greyscale for no-line coloring. Marcy is actually doing something brand new as well! She is offering her painted artwork for download so if you want to create an instant notecard that is all beautifully colored and ready to go -- you can! She's taken the work out of it for you. While I love the coloring journey, I think that this option is so nice for those times when you need a gorgeous card in a jiffy.
On to my creation! 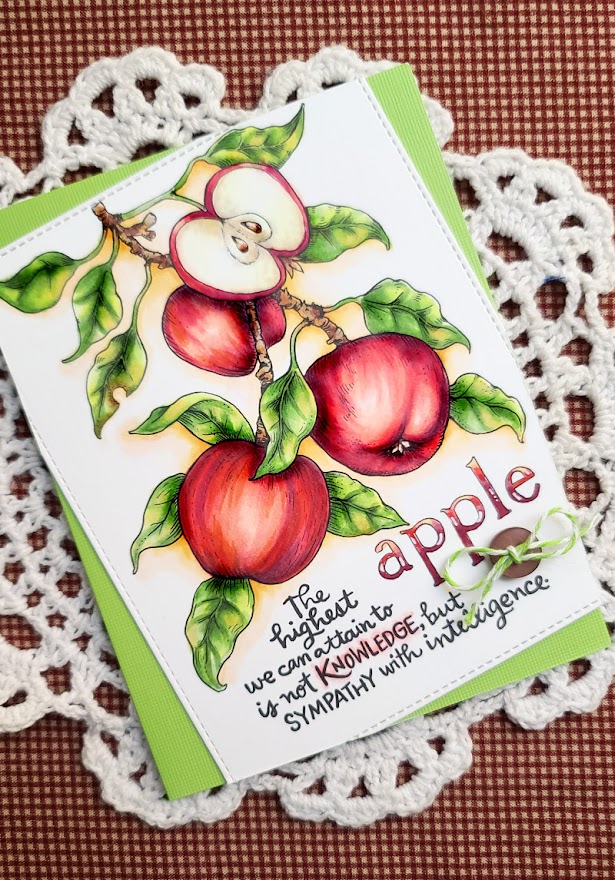 I grabbed my Copic markers and really just reached for colors as I went. The apples are mostly R30, R35, R39, R59 and a little BV00 to accent the shaded areas. I grabbed a whole host of greens, too many to list and then added a little Y32 to spots to add a little golden glow.
The beautiful thing about this illustration is that because it is so large, you don't need a ton of extras to make it into a card. I decided to put my illustration on a slant, add a button and twine and... ta da! Done!
I will say that I knew I wanted to add the button and so I created a space for it by erasing the name "Thoreau" from the quote. So sorry Thoreau. I love your quote and I didn't mean to "dis" you by not acknowledging it! But, a gal needed space for a button! Ha!
Here's a little closeup for you! 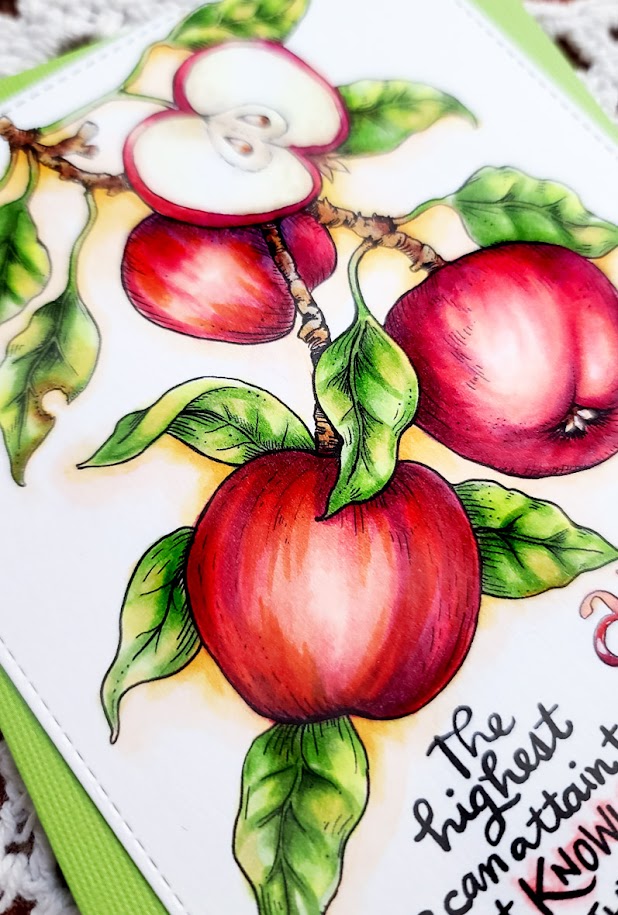 Want to see what the other gals did with these beautiful illustrations? A few of the designers took on the mission. Stop by to see what they have in store!
Christine Okken
Barb Campbell
And, don't forget to stop by the Power Poppy Shop to see what Marcy has to say about this new collection!
Just a little FYI -- I am hoping to color all of these and will be sharing a post hopefully each Friday until all four are colored! So, stay tuned! I promise it won't be so long until my next post.

So much fun to Colorado Marcy’s images again. Your apples look absolutely delicious. I love the slant on your card. Looking forward to more of your cards and these fun images.

Gorgeous coloring. I want to bite into one of those beautiful apples right now!

I am giggling that you apologized to Thoreau!!! Seeing your card made my heart leap. Dare I say, you have not forgotten how to use your Copics, not in the slightest. What a treat. Thank you so much for sharing your work today, feels good to be back "on"!! xoxo

Awesome card Julie, I love your beautiful apples and want to a bite from it. So realistic, it looks like they are laying on to the paper instead of being an image.
Thank you so much for sharing, stay safe and have a wonderful day.