For those of you that don't know, my "day job" is the editor of a regional women's magazine (Yellowstone Valley Woman. Recently for my Editor's Note, I wrote a little bit about my dad. I thought on this day we honor the men that made us the people we are, I'd share it all with you. 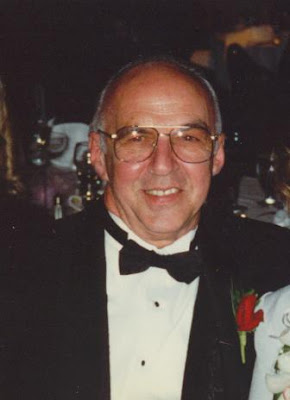 When I was 6-years-old I climbed up onto a speckled horse named Smoky and was trying to muster up enough courage to go on a trail ride with the rest of my family. As the horse kicked and swatted off huge horse flies, I was grabbing on for dear life afraid this massive beast would throw me off. I screamed, “I’m scared DAD!! Get me off!” With the gentlest look in his eyes, my dad said rather firmly, ‘If you get off this horse, I promise this will be the last horse you ride.’ I was speechless. My dad was basically telling me, buck up or get off. I stayed on. The photos captured from the family camera show the end of the ride with a little girl waving and smiling. My dad beamed. As the story flashes forward, I went on to become an award-winning equestrian. It’s funny how life works its magic.

My dad never told me not to quit. He lived and led by example. At work, he was known as the problem solver. If there was a difficult issue, they sent it to my dad and he’d work away until he found a solution. As an automotive engineer, that is not an easy feat. His “stick-to-it-ness” earned him two patents. I can tell you one of the patents was for an Integrated Manifold Muffler Catalyst design. What that means, I am still not sure. I just know it was something “smart.”

When you look at my dad’s story, it reads kind of like fiction. He was a high school dropout who quit school to race cars. When he got some sense about him and realized he needed school, he attended high school and college at the same time – finishing both in the same time that it took many to finish college alone. His love for racing never ceased. When he was in his sixties, he made it onto the pages of Car & Driver magazine for taking first prize in the Michelin One Lap of America driving his Grandsport Roadster. It was a cross-country competition that had him gallivanting from city to city to race around different tracks. It had my mom in knots with nerves. I think she thought he was too old to do that kind of silly stuff. My dad didn’t think it was silly. He called it living. Life is just too short.

The third lesson was the hardest for me to swallow. It was to be strong. I remember hearing the words “cancer” and thinking, ‘No, God, please no.” I had known something was wrong for about a year but for some strange reason, my dad’s lung cancer went undiagnosed. When it was found, it was almost too late. My dad, being the fighter he was, decided to jump into treatment with both feet. I watched him turn into a shell of himself after rounds of chemo and radiation. The vision would have me crying myself to sleep many a night. As we sat on the couch together one day near the end, I remember holding my dad’s hand with tears in my eyes saying, ‘Dad, you are my hero.’ With his trademark wink and smile, he said without losing a step, ‘That’s ok, but I am not wearing a cape and tights.’ Here was a man who was 5’11 and down to 135 pounds yet he was still a giant in my eyes.

My dad lost his fight with cancer five years ago. It’s a fight I remember each and every Father’s Day. I don’t remember to reopen my grief. I do it because even in death my dad continues to teach me. He lived until his last breath. He didn’t quit. Instead, he walked into God’s open arms knowing, there was a new problem to solve up in heaven. I still see his wink and his smile. I hold on tightly to those three lessons that will carry me to my last breath on earth. Dad, you continue to inspire.

Email ThisBlogThis!Share to TwitterShare to FacebookShare to Pinterest
Labels: My Life

What a loving tribute to you father. It made my heart ache for your loss.

Wonderful article, Julie. It brought tears to my eyes. He sounds like a wonderful guy - so sorry for yours and your mom's loss.

I can only think the Editors Note for this magazine will be the best piece of all! Very touching, Julie. Some day your hero will welcome you Home . {hugs!}

You know how to make a girl cry!!! Reminds me of my dad also; a great tribute on Father's Day. Thanks for sharing this, Julie.

Dad is smiling down on this day and hugging you tightly and whispering " I love you Monkey, you've made me proud to be called your Dad". He's with us in spirit and always will be. Mom
This was a beautiful tribute.

Your post leaves me with tears in my eyes... remembering my mom as I had lost her about 4 years ago. There is a day that goes by when I don't think about her. I know your pain. Hang in there. You know, you can still talk to your Dad, he will hear you. HUGS!

After reading this beautiful post, through my tears I wanted to say what a beautiful tribute it is to your Dad. I miss my dad too. And it's so true...we always carry with us the lessons they taught. :-)

What a wonderful father and he sounds like my own father in so many ways teaching us life lessons along the way. I too lost my father to lung cancer in 2000. I miss him every day! I am now the caregiver for my mom and thankful that today we were able to share some stories about my dad. Dar

Oh you made me cry! I miss my dad too. I think his best lesson to me was you can do anything, even if you are a girl, you can do the guy stuff....and he made me try and I did it all.
I didn't know you rode horse too!

I lost my Dad to Lymphoma...he was a fighter too, and taught me so many important lessons on life...

What a wonderful father you had! I enjoyed reading about your relationship.

Yep, I'm dabbing eyes too. What a wonderful relationship you had/have with your father!

Your tribute to your Dad was very sweet. It made me miss the dad I really never had. Every Father's day is tough for so many of us. Those like you, missing your very sweet, wonderful Dads, and those like me wishing we had Dads like yours. I always live vicariously through stories like yours and have always wished for a Dad like the one you had. Cherish those memories always as I know you will. They are priceless. Best, Curt

Dads are so important, especially to daughters. What a thoughtful post - it sounds like most of us are teary...

what a wonderful tribute to your dad. He was a lucky man to have you for a daughter, just as fortunate as you were to have him for your dad!

Julie... What a wonderful tribute to your Dad...
Sending lots of hugs girlfriend...

wonderful tribute. Your Dad sounds like a treasure. I'm sure he is very proud of you.

Thank you for sharing those thoughts and memories, Julie. We know more about you as well as being inspired by your Dad.

what a wonderful tribute!
I do have happy memories about my dad as well, it doesn't make me sad thinking about him not being here, it always makes me smile because I have good memories. They are a special kind aren't they :)

Julie, what a touching and beautiful story -- thanks for sharing!

ohhh! Dads are the best, I think. :) He sounds like a wonderful person. Thank you for sharing.

WOW......this made me so cry, what a beautiful tribute to your Dad. He must have been such a beautiful person! My Dad was such a loving person, too and your article makes me think of all the beautiful acts he taught me and to write them down for my son to know, as he never got to know him. My Dad died way too young, he was only 46 and it was 21 years ago on this Father's Day. I came to your blog to look at your gorgeous creations, but found this beautiful heartfelt article and I am so glad I did. Thank you for opening your heart and sharing about your beautiful Dad. By the way, my son is 19 and he races cars...but about to give it up to become a Dr. or a pharmacist, so I could so relate to your Dad's story. Much love and hugs to you. Eva

Anonymous said...
This comment has been removed by a blog administrator.
December 2, 2009 at 8:22 PM