Just a little more than a week ago, Gina K. Released her new images for March and one of them was from the talented Carolyn King. It's called Framed Flowers. Being a flower fanatic --- well, this one was a 'gimme!'

Last weekend, I got a chance to play and, let's just say, the fun has only just begun!!


This first card took me literally an hour and a half to make!! I started with a completely different concept and kept going -- until it morphed into this! I won't even tell you where I started because it would probably have you scratching your head -- saying 'Huh?' 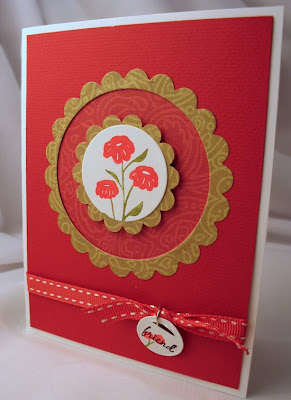 I used my classic circle Nestabilities to create a cut out on my red textured card stock mat. I wrapped some grosgrain ribbon around the bottom of it and tied on a smaller piece of ribbon to create my "knot". Before tacking it down, I matted some fun paisley paper behind it. I also used my classic circle and one of my scallops together - setting the circle inside the scallop as you cut - to create the green "frame." Debbie Olson did a tutorial on this forever ago. If you'd like to see how it's done. HERE's the link! She totally rocks.

After I attached my green frame and then created a smaller circle to stamp my flower on and a scalloped green to mat this on. I attached this to the center of my large circle using foam tape.

Here's a close up of the little tag that was created with some Cuttlebug mini tags - I threw away the original packaging so---I have no idea what this set is called! In Carolyn's set there are not only the big flowers but little minis as well. I used one of the minis to stamp behind my saying "friend." The saying is actually just a part of the full saying - "Thank you for being a friend." I love, on small things, to just ink up part of stamps. Man - think of the potential of all of those saying stamps you have!! 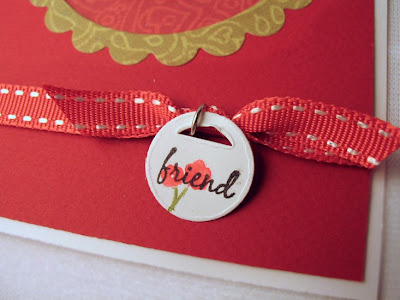 Posted by Julie Koerber at 8:00 AM

I really like the colors used and those nestabilites are a must have.
Cute idea with the "friend" tag. Pat

Beautiful card! I love the little tag and how you nested the Nestie layers!!

So very cute! I haven't used my nestibilities in ages! I need to break them out and give this a try! I love the layout! Take care! :)

Beautiful card. I love the little tag. I need to learn to use my nestabilites, haven't even taken them out of the package yet.

I'm here!!! Gawwwgeous card Julie!
That little tag is so neat and I love your colors too!

the colors are so vivid. great card!

Adorable. Great colors and i LOVE the little tag with the small flowers in the background! Fantastic!

Beautiful. Love the layer of circles.