I'm all shook up! 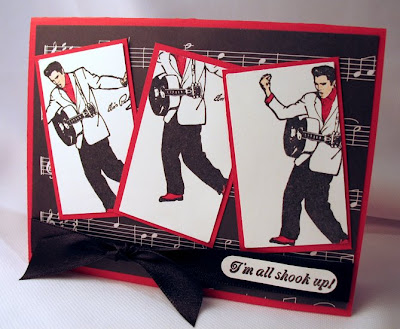 Last week we had one of the most fun classes EVER at my LSS. It was a blast to teach, but none of the fun was because of me. Can you believe it?? LOL! You're about to see why this class was a blast in about 3.2 seconds. It was an Elvis class and revolved all around some of the recently released images from Cornish Heritage Farms!

First, this is one of the cards we made that night. I took three 1-3/4" by 2-3/4" pieces of cardstock and stamped the Finger Clickin' Elvis all over the place on each one. I wanted it to look like he was in a blender! Seriously. Isn't he getting all shook up??? There's very little going on with him though. I just colored his face and hands with a flesh colored Tombow and then colored his shirt with my red Copic Spica glitter pen. Add some decorative paper. Cut the sentiment out with my Stampin Up Word Window punch. Tie some black satin ribbon on and done! Fun!

Now.... for the fun part. While our ladies were making their cards.... ELVIS ENTERED THE BUILDING... 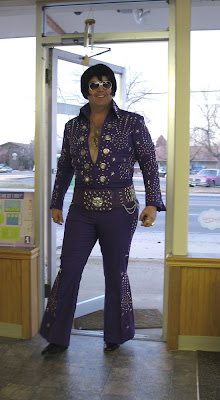 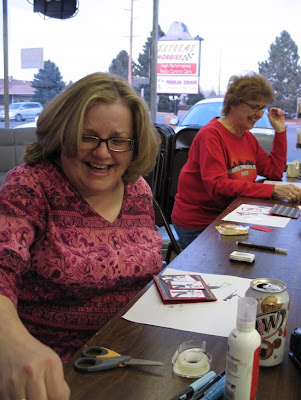 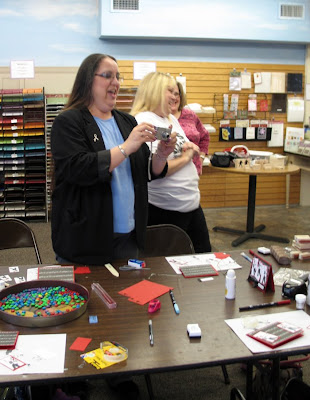 OK LADIES, don't all jump up at once to greet the King!!! This is Mary, the fab store owner who helped put all of this together. She has the "connections" to Elvis. How fun is this??? 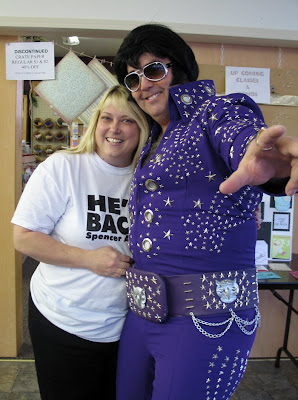 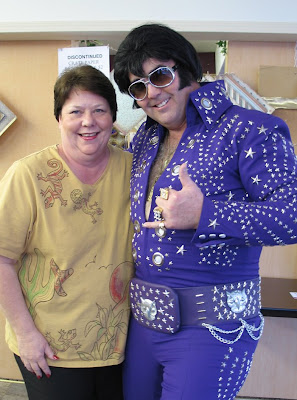 Two lovelies showing off their cards! The card on the left I'll show later this week. It was influenced by one of the CHF designers who has done AMAZING things with this line of stamps. I'll fill you in more on that later! 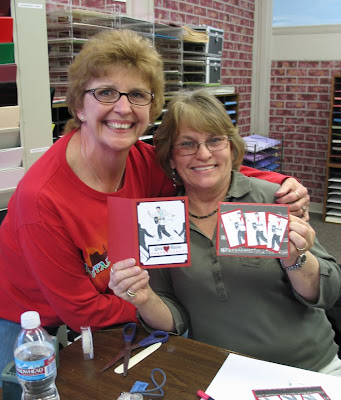 I don't know about you, but something strikes me funny about Elvis taking an interest in rubber stamping. What a good sport to put up with all of us!!!! 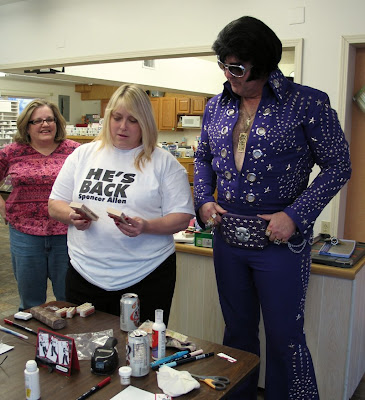 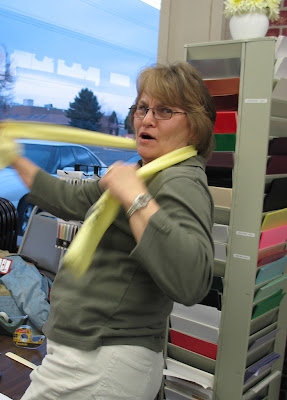 We had an absolute blast! Tomorrow I'll show you the cute mini picture frame we made to put our Elvis photos in!! Happy Monday!!

Posted by Julie Koerber at 8:37 AM

Oh that cracks me up! How fun for you all.... I do love those stamps too! Hubba Hubba! :oP

Such a fun class, and great cards, Julie!

How much fun that must have been, wish I could have been there. Really cute cards. Who would have thought... Elvis rubber stamps? Pat

okay, this is one of the coolest and most creative things I have ever seen at a stamp store!

OH MY WORD> The is hysterical! What a HOOT!! Love it!

HOW FUN WOULD THAT HAVE BEEN!! Love your Elvis card and the ladies look like they are having a hoot!!
Have a great day!

It looks like so much fun you had! Just look at their expressions when Elvis walked in LOL!! Oh and GREAT card too :)

How fun this must have been!

Oh Julie that's hilarious!!! Way to go,that's the way to have fun!!
The cards are wonderful!! Lol,your pics are awesome!!

Oh I love the card, and it's looks like you all had a blast!! lol...Hilarious...Elvis showing up!! LOL

Looks like you all had a blast! And the cards are really cute too.

looks like everyone had a great time. wish that I could have been there.

oh my gosh what a blast that must have been! My mom would love this card, she still loves Elvis. I remember the day he died I was hanging clothes out for my mom when the phone rang. When mom got off the phone she started crying and I mean crying big time, when I asked her what was wrong she said she couldn't talk right now and locked her self in the bedroom!!!! I thought someone in our family died so I started crying. When mom heard me crying she came out and I asked her if someone died and she said yes Elvis........well, I'm sorry to say, I didn't feel her pain nearly as bad as she did!!

This is definitely what I call FUN! A surprise like this is always great after a day doing crafts. Great card BTW! It seems like they were more than one stamp.

Oooh How fun! I am moving there. How is the housing market, who cares about job market. DH will have to figure that out :-)

How fun was that! Such a cute card and what a fun time it looks like y'all had! So very cool! TFS and have a great day! :)