I wish I could say the beach is my great escape but living in the mountains... I don't see it often. That's why when I set eyes on the new set by Lauren Pope, I thought, well at least I can stamp the beach if I can't sit on it! 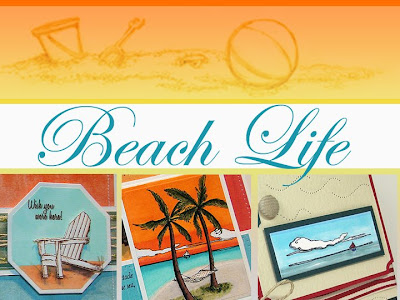 This set features a handful of elements that you can use to create your own summertime beach scenes. I can't share too much because this set won't be released until Friday night at 10PM Central, but let's just say it has a little something for everyone - from easy to color elements to those that you can use to just let your creativity flow!!

Here's what I dreamed up! 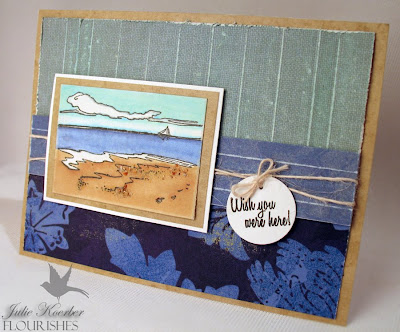 I wanted a card that had that sand blasted look with a hint of a surfer feel! I picked decorative paper that was white core so that if I scored lines into it, I could go back over it to sand it down to look like a kind of beach house bead board.

I used the two middle colors from the Copic Delphinium Collection and also two of the lightest colors from the Flesh Tones 2 collection for the sand and the lightest shade from the Water Collection for the sky. After I colored it up-- do you know what I did? I took a 400 grit sandpaper to it! Yep. I did. I lightly rubbed the paper over it so that I would get a more muted serene look instead of a real brightly colored beach scene.

Do you see what else I added? 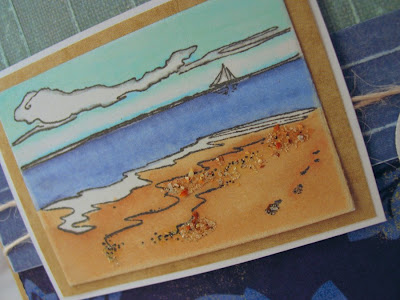 Real sand! A friend of mine (Denise G.) took a trip to the ocean not too long ago and sent along some sand from her adventure. My husand and I were laughing because when it arrived, the envelope was leaking sand! We were wondering if at any point in it's journey if it was quarantined as a mail threat! :-) I love using the sand on the card though! I just dabbed on some clear drying glue and stuck it down!

After I matted up my card, I added this fabulous twine and then added my sentiment from the set thanks to a 1" circle punch.

The rest of the DT also hit the beach with this set and delivered some sunshine with a little paper and ink! You can hop on over to check them all out!

Would you like to WIN this set? Hop on over to the Flourishes Newsletter and leave a comment on the Beach Life post! They will announce the winner tomorrow!

Don't forget to clear your social calendar! FRIDAY NIGHT - JUNE 10TH - is the FLOURISHES SHORT 'N SWEET RELEASE PARTY! It kicks off Friday night at 9PM CST over on the Flourishes Forum on SCS! It's just one hour so -- don't be late! We don't want you to miss out on the fun! We'll have more samples from our talented DT, games, fun and suprises!

Also..... you still have some time to compete in our By the Sea challenge! All you need to do is make one card and you have a shot at winning all three of our new releases! Click HERE to read up! You have until Friday at 5 PM Eastern time to enter!! Don't miss out on all the fun!

Thanks for stopping by! See you back here soon!

Email ThisBlogThis!Share to TwitterShare to FacebookShare to Pinterest
Labels: Flourishes

Your projects this month have just been amazing, you are such an inspiration.
hugs
Latisha

Very cool! I really like the sand feel you added and the rugged feel with the dp, twine and fridges. Great job.

Oh the real sand is such a perfect touch Julie! Sandblasted surfer style....that could be a new trend name girl!

Beachin' card, Julie! Love the colors and all the little details....I've brought back sand from some of our dive trips, but have yet to use it....now if I can just remember where I put it...;-)

Have a great weekend!

I was useful! I helped the Goddess of Beautifully Stamped Creations make a way cool card! Of course, you did ask for the sand and it was such a simple request for such a lovely friend, postal regulations be darned. LOVE that bead board ~ clever idea! Happy Weekend!

Great card Julie! Sanding the paper and sand ON the paper - very creative!!!

Very pretty!! Love you added the real sand on the card!!

OMGoodness, Julie! This is a real stunner! LOVE how you added the real sand...just perfect!!

This is so very beautiful!! I love that scene with your sand and twine!! Awesome look!!

Simply beautiful card - Julie!!! I love that you chose this image - so serene and peaceful looking!!! The twine is the perfect finishing touch!!! Hugs ~S~

I love the real sand! What a perfect finishing touch to an already fabulous card, Julie!

Very beach beautiful! Great color and I really like the colors, DP, all.....